Start a Wiki
Welcome to the Korean Hub
The place for learning and starting out in the Korean Server.
{Skip to translations button}

Korean Hub is this wiki's central collection point for guidance through the Korean version of
Dragon Blaze (별이 되어라!, byeol-i doeeora!, lit. "Be a Star!").
For a long time the wiki has been separating the Global (GL) and Korean (KR) version of the game. Unit articles have been strictly kept exclusive for Global released units, and articles for Game Modes or Systems have never featured their Korean counterpart. Allies, which we focused on in the past, were translated and collected on so-called "Unreleased Allies" articles and is still to this day (that will also not be changed as visitors enjoy comfort with all skill translations on one page). Those decisions were made due to Gamevil's policy during that time. Community Managers and the company itself encouraged and enforced Global discussions and forums to be exclusive to that as well.
Over the time that policy has loosened up, and consequently that of the wiki as well. The wiki decided that even without that change of mind, we would cover the game in all its entirety. DB KR and DB GL were no longer two versions for us, but now treated as simple as two separate servers, just as NA and EU are to one another.
Now, the wiki is undergoing many changes to follow this new goal. Articles will in not-so-distant future, cover all mechanics and aspects of the game mode, system or feature, regardless or Global or Korea (altho the differences must and will be indicated). The wiki's layout has become much more Korean friendly as well as now the sidebar and the homepage focus a lot on offering our Korean visitors resources as well. A wiki should always inform about all aspects of a topic and eventually become the most complete encyclopedia for said project.

Ultimately, this article, this Korean hub for DB KR will guide, offer and function as a representation for that change.

This article will guide visitors in multiple ways and has several goals set to prepare and guide for player through DB KR.

If you prefer other mediums for apk installing choose those. Other options would be "Qooapp" (apk needed for itself).
APK-pure and Qooapp also come with phone applications, for easier access.

The new player guide is rather straightforward as Flint do their best to guide the players step by step through their missions. New Player Missions change rather frequently.

Korean names and their romanization (after RR) can be found on their articles (See Category:Deity or Category:Key)

These buttons will appear for all units alike (Normal Allies, Deities, Keys, Transcended, etc), but the amount of avaible buttons will differ. For that matter, the entire pool of buttons will be presented. Button color stays true across the unit types.

Note that some buttons disappear for example when the ULTIMATE enhance status was reached (upon which half the buttons vanish). The tables below will show represent any status before ULT.

When arrangement of buttons is incompareable, go by hangul and color of the buttons 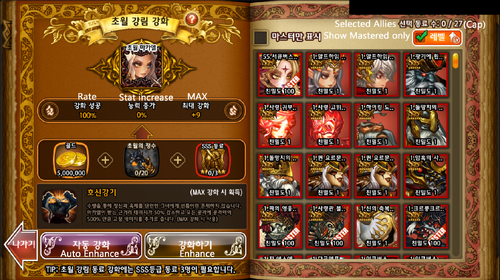 Submit new Error Messages through the comments. Please use imgur/alternatives for images

Submit new Buttons through the comments. Please use imgur/alternatives for images

The Wiki Staff has always and will always make translations of Korean Patches. It dates back to the very creation of this Wiki, where we intially only translated Ally Skills, only to later on work on entire patch notes. Because of our experience (which drastically improved to extremely honed quality) and our continous dedication to feature translated Patches (we are the longest continoues source for translations), we would like to consider us the most reliable source for Korean News.

All Patches will be translated the day they are released in Korea. (Usually a Wednesday or Thursday; teasers a day prior, rarely on the same day) Because the translations are being made by a single person whose timezone interfers with the patch release, translations might come with a 3-4 hour delay to the Korean release.
Translated patch notes will only be featured in form of "Blog Posts". On Wikis, that is a feature where Editors can create such posts, but they wont count towards the Wiki's article count. This clusivity allows patch notes to be less formal as our usual articles would be, which can be considered necessary given the, often times, spare information given by the Korean CMs in their patch notes.
Do note that

For the last point: We consider our translations an offer for not only the Korean players, but equally important for the Global players. It should inform them about what is to come. Packages are in that consideration not necessary. It may happen that we feature them anway, though.

The following box will always display the last 2 posts and therefore, patch translations.

We consider important to make the Korean Players among our visitors aware of the fact that "Full Buff Events" or other quick announcements, leaks and similar are delieverd through the #korean_server channel in the "dragonblaze" Discord.
Through the @KR ping, the wiki staff and other users will inform everyone when minor news are announced.

The following Category Tree shows an updated list to Game Modes or features that are currently not featured on the Global game version, and are Korean only.

When falsely categorized, leave a comment or message an Admin.

The wiki features a page that shows unreleased allies from the korean server on the article page with the same name, here invoked for presentation.

Source are the patch notes from the official Korean dragon blaze forum. Note that names are subject to change and released skills can be an earlier version of their Korean counterpart.

Where to find in the Article Navigation

The {{ArticleNavigation}} template invokes a table with all of wiki's articles and differentiates between Global features and Koreans. It is for example used on the Homepage. It is another option to check for differences between the two game versions.

Questions left? Or suggestions to improve this page?

Retrieved from "https://dbaddiction.fandom.com/wiki/Dragon_Blaze_Wikia:Korean_Hub?oldid=42297"
Community content is available under CC-BY-SA unless otherwise noted.