Exalted (신위, sin-wi)ⓘ, commonly referred to as MJ, is a new type of allied units added to the Korean game version with the season 6 patch.

These Allies are G-Grade allies, which feature 9 bright (as opposed to the Overlords dark ones) stars and therefore surpass R-Grade. They are currently the highest class of units.
Exalted icons, feature an ornamented purple and white background, in contrast to the R-Grade's crimson one..

With season 6, the first Exalted Allies have been added to the game, introducing the Exalted System, which analog to the Overlords System, allows lower ranked allies to evolve into units of the Exalted-Grade.
That Exalted System will be the predominant topic of this article.

Exalted Units feature 3 regular Passives, similar to the Overlord units, and they reach their MAX Enhancement state after 11, opposed to 10, enhancements.

The creation of Majesties shares many similarities to the old Deify System.

To create a Exalted Unit serveral requirments are needed:

Players can either select their desired Exalted Unit in the Exalted ally lobby and click the "God's Advent" (신위 강림) button, in order to be lead to the Overlord ally lobby which then presents the allowed material units for the descent. (img 1)

Players can also choose to visit the desired material for a descent by pressing the "God's Advent" (신위 강림) button in the Transcended ally lobby instead, which then presents the allowed creations. (img 2)

All materials used for the creation are consumed, including the Overlord ARCH Unit.

Retention Effects involving the lost Overlords will be preserved regardless.
The ARCH enhancement of sacrificed Overlords will continue to count towards Retention effect that have been or are yet to be unlocked.

Buffs from party members' actives, passives or normal attack effects (of any grade) will still take effect on Majesties. 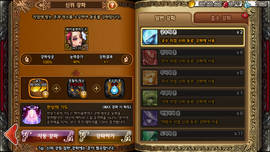 Majesties' enhancement window is accessed through the regular "Enhance" (강화) button in the ally lobby.

In order to enhance Majesties, "Souls" of the same Class are required.
The enhancement window automatically selects the allowed Souls. Read the Soul System article for more information about Souls.

Pressing just "Enhance" (강화하기) will consume resources worth only one enhancement level upwards. By pressing "Auto Enhance" (자동 강화) resources are consumed for the enhancement of that unit until exhausted.

Enhancement costs are presented in the table below.

Retrieved from "https://dbaddiction.fandom.com/wiki/Exalted?oldid=40963"
Community content is available under CC-BY-SA unless otherwise noted.