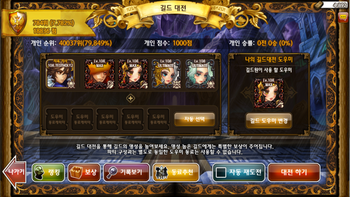 Guild battles (길드대전, gildeudaejeon or "Guild Wars")ⓘ are weekly competitions where the members of different guilds can compete in PvP designed battles.
It is also the only PvP Game Mode without Leagues.

The game mode experienced two reworks in total. This most recent version was added to the Korean game version after being previously closed for several patch cycles, where upon Guild Battle was revamped in the 29th September 2016 Korean Patch. To the Global version it was added with the 23rd May 2017 Patch.
For explanations to the old versions, request through the comments.

One's own team must consist of 1 Character and 4 Units, in addition to 5 Helper Allies. A party with any less members wont be able to engage the battle queue.
The player can choose those 5 Helper Allies, which were registered by one's guild members and register his own Helper Ally into the existing pool through the mode interface (only Transcended & Keys can be registered).
Guild members can view the equipment, stats and owner of the unit.
One may also make use of the [Auto-Select] button for Helper selection.

Duplicates (s. image right) are possible if the Helper Allies selected have different Key units equipped onto them. Otherwise, duplicates are not permitted.

Once a team has been registered, its equipment is snap-shotted and added to the pool of avaible enemy teams.

Just like every PvP ground will Guild Battles experience great ATK reduction to all units, which will be contentiously lifted in 30 second intervals after a Rage Mode (Rage mode occurs after X minutes).

The player will match up with his 5 main party and the 5 Helper Allies against a random player from a different guild of his server. The battle and system itself is comparable to Arena.
The matched opponent is based on the player's personal score and other criteria such as availability.

Helper Allies can be called into the battle to replace units from the main team through the Tag System, as seen in Revenge of Belphegor. There is also an Auto-Call button for that matter.
In that case its also possible to have the same units in a team (1 unit from the main team, 1 from the Helper Allies).

The game mode works based on a point system. The player starts with 1000 points and gained or lost points are based on the battle result. Both the initiating player, his opponent and all owners of the selected Helper Allies from the initiating player's side gain or lose points depending on

The personal score will accumulate into the Guild's score on the ladder.
Guilds and their members are rewarded after the weekly reset on Monday at 00:20 am.
The Guild will be rewarded with EXP for their Guild Level, depending on their rank.
Guild members will get set amount of rubies. The first 5 will get more than the ranks 6-10, with 11-50 being rewarded the least amount of rubies. The players will also get rewards from their individual rank in comparison to all participants. 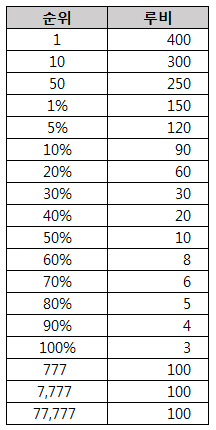 Retrieved from "https://dbaddiction.fandom.com/wiki/Guild_Battle?oldid=28749"
Community content is available under CC-BY-SA unless otherwise noted.