Guild Siege Battle (길드 점령전, gildeu jeomryeongjeon or Guild Occupation) aka "Occupy and Plunder" or "Guild Capture", for english Korean players, is a PvE game mode which was added in the 19th October 2016 Patch for the Korean game version, as the new addition to the Guild modes.

Commonly referred to as "Baal" or simply "GC" (Guild Capture), it actually consists of two parts that take place at different times, therefore making "Occupy (Siege) and Plunder (Loot)" a fitting name as it represents those two modes and their independence from one another.

They have mentioned that they will be constantly updating the mode to keep the difficulty level at a relatively high ground through the bi-weekly patches, a promise that has been kept rather faithfully thus far. The reason for that is global participation, which naturally requires it to have a certain level of difficulty.

They are two game modes but share the same lore-context.
Both game modes can only be attended when the player is part of a Guild.

Taking place Sunday from 7 PM to 9 PM, this mode will unlock in the Honor Gorge.This PvE game mode is similar to Guild Adventure only unlocked during specific times.
The goal is that all Guilds on a server participate in a 2h raid, to bring down the global Boss' HP down to 0HP.
Rewards will then be decided upon the Guilds' and their individual members' contribution points in the Boss' defeat. 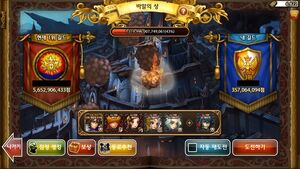 The game mode resolves around all guilds battling the common enemy "Ba'al" (read about Ba'al the demon) The waiting room will display the top contribution guild on the left side, and your own guild, with its contribution points on the right.

The player can choose his team and [Challange] (red button) the mode and set the [Auto Retry] (blue button).
A team consists of 4 allies, the main character and 1 helper (no time limit for the helper). 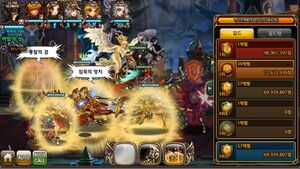 During the battle itself, the party will experience permanent

debuffs, reducing them for all allied units.

Guild Siege Battle is active for as long as the guilds of a server (EU, NA, KR etc) require to take down Ba'al's HP bar. If the server does not successfully raid the game mode in the 2 hour duration, "Guild Loot Battle" will not take place for that week.

In the battle itself each player fights mobs that spawn in a wave system similar to Adventure. Each time the overall HP bar's color changes (eg. from green to orange) a boss will appear. The boss stuns with normal attacks and remains until a certain threshold in the overall HP bar is reached, upon which the circle starts a new.

The player earns contribution points for himself and ultimately his Guild to accumulate.
Similar to Guild Adventure, a scoreboard is visible to the right, showing both the global Guild ladder and the in-guild position of oneself.
Above the scoreboard is the usually display for the Boss' remaining HP. 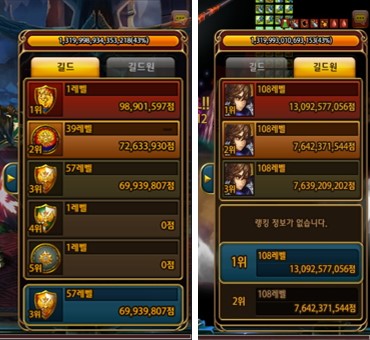 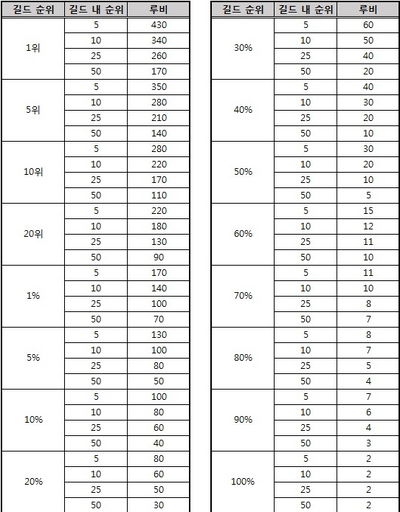 Rewards are given out to the top five guilds each day of the week, instead of earning rewards in Guild Loot Battle 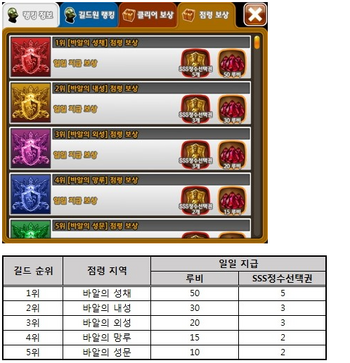 Following the theme of being "one, but two", Act 2 - Guild Plunder or Guild Loot, can only be played when the players have successfully beaten Baal and his army on Monday.

Following the Sunday events, from Monday 11 AM to Saturday Midnight, the Guilds will participate in the "Plunder" game mode, which replaces the "Occupy" button in the Honor Gorge. 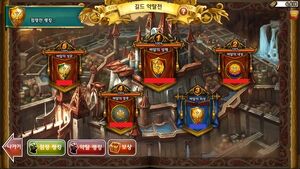 The five top scoring guilds from "Occupy" will now play a lead role. They themselves do not participate for the remaining week and earn rewards displayed in the reward tab of the previous section.

The top guilds' names will occupy the 5 parts of Baal's fictional fortress. They have no direct influence on the battle itself.

The game mode is to be categorized as PvE. It is no longer a battle where all Guilds in a server play together, but all Guilds have a "copy" of those 5 top scoring Guilds for themselves.

Each guild member can now attend the mode with the goal to decrease the HP bars of all 5 bases to 0 and claim rewards for himself and his Guild.

The battle itself is the same for all the 5 bases, the only difference being the difficulty level (Guild 1 being the most difficult to battle against).
All 5 Guild bases will confront the raiding player with the same mob wave system seen in Occupy.
Players fight against normal mob waves, which take form of Baal's army. Similar to "Occupy" a scoreboard will be visible at the right side of the screen. Each time the color of the bar changes (eg. from green to orange) a boss will appear. This can make it possible for players to skip Boss waves by letting the others battle against the Boss, and only fighting the mob waves in-between.

A team consists of the character + 4 allies and 1 helper ally. No consumable items can be taken into battle.

Plundered Guilds will appear gray and cleared.
Successful plunders will grant ruby rewards.
Each Guild has a time frame of 6 days (Tuesday to the next Occupy), to defeat all 5 bases. Guilds and players will receive the full rewards for all the bases they have defeated. E.g. defeating base 1,3 and 5 will not only reward the supposed rewards for the 1st base, but all the 3 bases. This also allows weaker members of Guilds to take on the lower ranked stages.

On top of the default rubies, players are rewarded based on their contribution in the raid.
The lobby screen below shows the guild members and their contribution to the defeat of the Guild in %. (The number in the blue banner top-right displays the number of participants, for the Guild Masters out there). The % is the basis for the extra reward and is being rounded to the next even number and results into the extra amount of rubies. 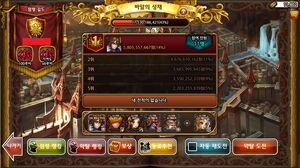 For the total calculation, we will need to consider which base was plundered, as they wield different reward tiers.
The formula is:

This might seem low as for the lowest position this may be a mere 20 or at maximum 30 rubies, but claiming the first base can lead to extremely high amount of extra rubies, as just 15% * 6 = 90 can lead to almost 100 extra rubies.

Retrieved from "https://dbaddiction.fandom.com/wiki/Guild_Siege_Battle?oldid=31068"
Community content is available under CC-BY-SA unless otherwise noted.