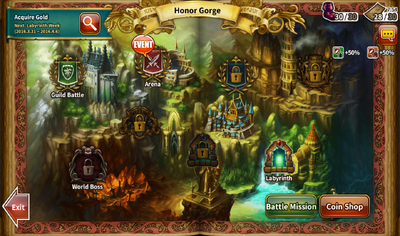 The Honor Gorge is an interface menu that gathers most game modes of Dragon Blaze to one place.
This activity map is located by the button "Fight" next to the "Adventure" button in the main lobby.

It was implemented with the game version 3.0.3 in the Shariet World Boss patch.

The Honor Gorge houses all the PvP and most PvE game modes.

It also houses the Coin Shop as well as several missions and bonuses, including the Battle Mission and Weekly Bonus. Read below for more information.

The Battle Mission is a weekly achievement Quest, which rewards players when certain goals are met. Rewards will only be sent out once per week, across all Characters. This mission resets at midnight on every Monday.

The Weekly Bonus is located in the upper left corner of the Honor Gorge and can be expanded by the magnifier icon.
It provides different buffs depending on the ongoing "Event". The game mode which is affected can be identified by the red "Event"-bubble next to the game mode icon. 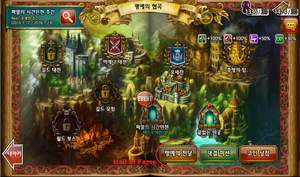 Located through a button at the bottom of the Honor Gorge screen.

It is a non game mode feature that rewards the players of every game mode and the best 3 guilds that achieved rank 1, every month.

The Hall of Fame is a gallery that displays the best players of all game modes that have ranks.
A real-time representation of the character that they ranked with and the both the character name and account name will be shown.
The top ranked players for both Hero and Buster leagues will be displayed.
Via "Ranking Details" the player can view the top 3 of the game mode in question, as well as his own placement in the ladder.
The average placement shows the average numbered rank that the players reached within each month.

Players who rank 1-3 in any Honor Gorge event (except Guild Battle) receive a reward in form of a special costume, which is permanent.

The title "Buster God" and "Buster God's Guild Members" will be permanently rewarded to both the 1st-3rd Arena players and 1st-3rd guild members of the monthly best Guild respectively.

Retrieved from "https://dbaddiction.fandom.com/wiki/Honor_Gorge?oldid=26949"
Community content is available under CC-BY-SA unless otherwise noted.