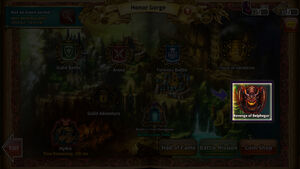 Revenge of Belphegor (벨페고르의 역습, belpegoreuui yeokseub)ⓘ is a PvE game mode added to the global game version 3.1.2, but due to technical issues only fully enabled on the 22/September 2016.
Often known as RoB, it replaces the Labyrinth game mode and will therefore also take its place in the weekly schedule.
RoB recreates the idea of an endless battle from Labyrinth with its swarm spawning game mechanic.

Upon entering the game mode for the first time, the player will encounter a lore clip that features princess Leah (레아, Rhea/Lea), Merciful Mercedes's little sister, as revealed in Yggdrasil's Prologue (Chapter 4).
She is attacked in her room by Belphegor, the Helldragon. Upon the MC and his party's arrival the game mode's battle starts. 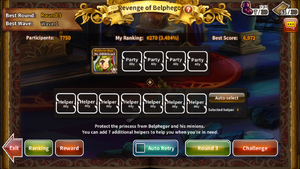 RoB teams consist of 4 Allies and the Character. Also, up to 7 Helper Allies may be chosen. Not all 7 slots must be filled to attend the mode.

The Helper Allies behave differently to other game modes. They are selectable one at a time, and can replace any of the main team's units (except for the Character) during the battle.
They are not limited by a cooldown and only death can stop them.
As many Helper Allies may be chosen to replace the main team as needed, although there is a brief 2 second cooldown on the selection. It is essentially comparable to actually replacing the main team.
Upon doing so, the units will:

Additionally, Formations boni will be preserved, no matter what unit is traded into the team, which would violate the formation's occupation rules under normal circumstances.

The player will be confronted with waves of NPCs. They come in rounds, while 1 round consists of 10 waves, which spawns 10-X NPCs each.
Let X be an increasing number, since the number of NPCs per wave increase in later rounds.
Each round and wave will be announced on the screen (stops time) and each round also displays which Boss NPC will await the player at the 10th wave.

The player is given a time limit, which will start from 60 seconds. However, time increases by 12-X seconds, upon the end of each successfully cleared wave. This way the player may collect or refresh his time pool.
Upon hitting 10 seconds, a sound and visually highlighted time-stamp will count down until 0 seconds, upon which the battle ends.
The amount of seconds granted upon clearing each wave increases in later rounds.

Points for the rankings will not be granted after waves have been cleared but each time NPCs are slain.

The NPC count per wave is left to the timer and will display how many more monster have to be defeated until the wave concludes. The wave Boss is considered in that total count, meaning that the 1st round's wave all spawn 9 monsters per wave + the wave boss.
Note that the count will heavily lag behind, but that does not affect the battle timer. The player will move to the next round/wave without any issues.

The game mode does not allow any consumable items but it grants the player 3, preset skills per attendance.
They are known as Lethal Moves and can only be cast once, without a cost.

From left to right

Acquired points will rank the player in the ranking ladder, competing with other players of his server.
Note that the rankings can take from 1-4h to update. Only display is affected, the true rank is recorded by the server without any problems.

Clearing a round for the first time during the week will grant the following boni upon its weekly closing, on Thursday.

Retrieved from "https://dbaddiction.fandom.com/wiki/Revenge_of_Belphegor?oldid=25387"
Community content is available under CC-BY-SA unless otherwise noted.