Don't forget that we have a discord! Very often I (Drkdragonz66) will translate in the discord first before the blog post here is updated. 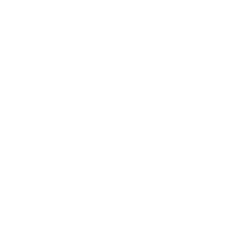 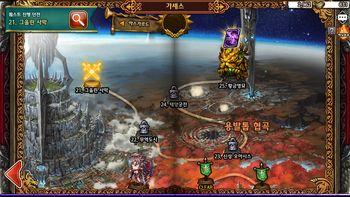 The five deities are the patron saints guarding the "Gardens of Gaia", the ruins of the five dragons in mythology.
And this magnificient ruin, also has the alias "Forbidden Sanctuary".
Thermal deserts, rugged gorges, and powerful guardians are blocking access.
Now Osiris, the chief executive of Infu, and his fleet are coming.
Why is the Hero's descendant heading to the forbidden sanctuary where the guardian gods have disappeared?
What is the truth hidden in the forbidden sanctuary?


This is the last story in Chapter 6, and when the last stage is cleared a Random Infinity Card is given as a reward!

Guardians of the Forbidden Sanctuary 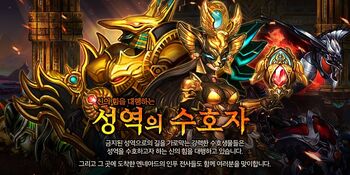 There are powerful guardians who act with the power of God to protect the sanctuary.
Also, there are the Warriors of Infu who hail from the strongest Odyssey.
They face the descendants of the Boden,
Will they reach out in friendship, or reveal a hostile blade?
Meet the Protector of the Sanctuary, who has the power of Gods and Heroes!

Hathor, the Woman of Love 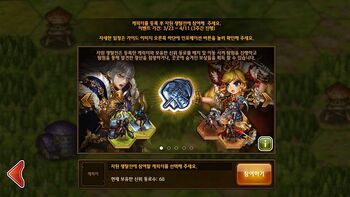 Located in the Honor Gorge, Resource Struggle will last from Saturday 3/23 to the Thursday 4/11 Maintenance (just under 3 weeks). There are two phases to the Resource Struggle: Registration & Contest.

Players will register their Main Character, and up to 8 users will be in the same Contest group. Note that there is no rankings or ranking rewards between the 8 players, and the only rewards are those gained from the Contest itself.

Here is a small showcase of what the Contest period looks like, this is me (Drk) 30 minutes after it started. The map is huge, and I probably made a mistake by putting down all my strong attacking units down at the beginning. https://youtu.be/p5lWGVemvY4 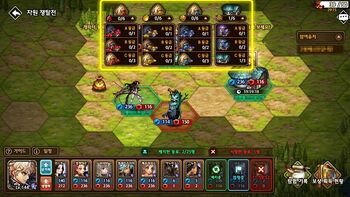 On the top of the screen, players can see the status of the Ruby/Gold/Runes/Ally mines by clicking the arrow to expand the window.
On the bottom right, there are 2 buttons. The left one opens a log of the player's exploration, resource occupation, and combat results. The right one opens up a window showing all their occupied mines in real time, and the other tab shows all the resources obtained during exploration (to be paid out in the mailbox at 00:20 Saturday). 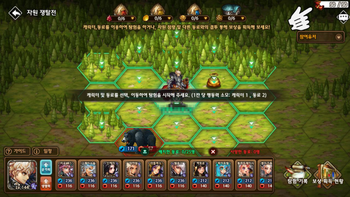 Players start and have a cap of 50 'Actions', with a new Action being gained every 30 minutes. Actions are used every time the MC or an Ally does anything, with the MC Movement costing 1 action, and any Ally activity costing 2 action. Up to 25 of the player's Allies can be deployed on the map at one time. Once deployed, an Ally will remain deployed until their vitality reaches 0, and a death timer will appear. 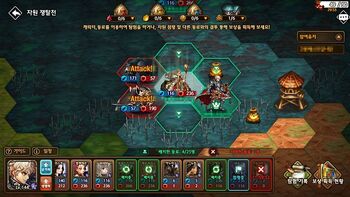 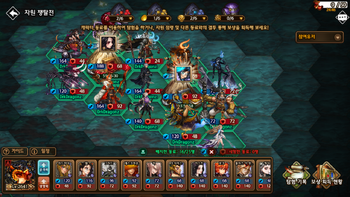 The main goal of the Resource Struggle is to occupy the most mines. There are 4 types of mines, Rubies/Gold/Runes/Allies, which each type of mine having 3 Grades of mines that can appear on the map. Higher grade mines are more likely to appear near the center of the map. To occupy a mine, place an ally on the mine. Every 10 minutes, you will acquire resources based on the type of mine.

However, the mines can be captured by enemy players defeating your ally and taking over. Because of this, it is recommended to place allies around the mine to defend it.

When not occupying mines or battling, MCs and allies can explore the surrounding areas for treasure chests and gold pouches. Main Characters can see 2 spaces away from them while allies can only see 1 space away from them, but if they occupy a surveillance tower, they can see 2 spaces away from them. It seems that players can also find strengthening potions during exploration, which increases that ally's attack damage or vitality. However, if an ally encounters a trap during the exploration, they will be unable to do any actions for a fixed amount of time.

"I went up to the watch tower and my view was expanded! You can place allies in an extended range."

"Vitality has increased by +30 with the acquisition of the Strengthening Potion."

"You cannot move for a fixed amount of time. "
Add a photo to this gallery

Note: The player cannot collect all the resources from some of the A-Grade Mines, it is that long to ensure that resources never run out (Contest lasts 5 days).

The Affinity system from the 4th anniversary event returns as a permanent feature now! By using items, players can increase their Affinity with an ally, which gives rewards every 20% until 100% where players receive the ally's Infinity Card. Each ally has 3 particular items that will give them increased Affinity compared to the other items. Players also can give a small amount of affinity to 3 different allies per day.

Once a player has reached 100% Affinity with an ally, it will reset back to 0% and players can re-affinity that ally again. However, the amount of Affinity needed to reach 100% will increase with each reset. 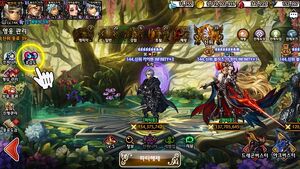 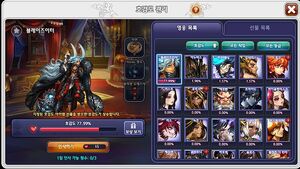 The Affinity System Screen
Add a photo to this gallery

Affinity items can for now only appear as part of the Calydon Dungeon Rewards, with it having a 15% chance to drop an Affinity item during a run.

Calydon has been reworked to make it faster for users, by removing the 25 & 50 Pigs stages. This means there is only an 100 Pigs stage, which means runs are now much faster compared to before. The gold obtained per run has also increased. 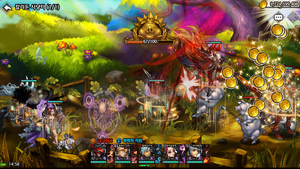 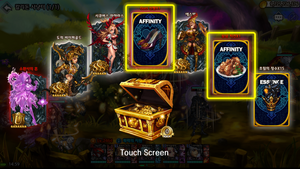 Players can now select how many times they want to auto-retry in World Boss and Arena! In World Boss, it is up to 10 times because of the limit. In Arena, it can be as many runs as the number of tickets owned.

The new accessory can be acquired by combining 3x Eternal Goddess' accessories or bought from the Shop's 110k Won package.

The player can fight against Kvassir in a raid, with it having a chance to drop multiple items, mainly the Bear Pieces. Once a player has all of the bear pieces for a puzzle, they can redeem it for a reward. The raid also has its own raid shop, where one can buy Kvassir Treasure Boxes.

Retrieved from "https://dbaddiction.fandom.com/wiki/User_blog:Efflictim/21/March/2019/Chapter_6-4:_Omega_and_Alpha_Update?oldid=41901"
Community content is available under CC-BY-SA unless otherwise noted.